On this day in 1898 during the Spanish-American War, the US was fighting in Cuba against Spain. US forces were landed to the east of Santiago between June 22 and 24, 1898. On June 6, the US had landed at Guantanamo Bay in Cuba.

The Spanish-American War started for the US with an official declaration of war on the 25th April 1898 (which said the war had begun on April 21st)  and ended on the 10th December 1898 (though hostilities had ended on the 12th August 1898), with the US in possession of Cuba, Puerto Rico, Guam, the Philippines and Hawaii (which was annexed by the USA during the war with Spain, though not a Spanish colony). 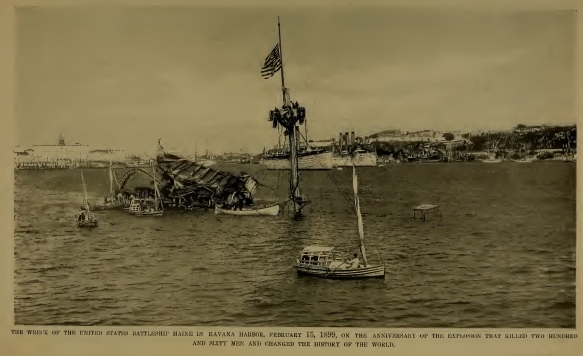 ABOVE: Wreck of the US Battleship Maine in Havana, Cuba – 15 February 1899. It was the sinking of the Maine that effectively brought the USA into the war with Spain.

For more on the Spanish-American War download the following books: