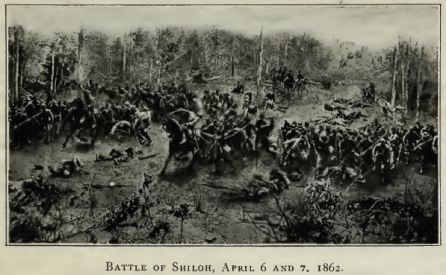 ABOVE: Scene depicting the Battle of Shiloh

On this day in 1862 during the American Civil War, the Battle of Shiloh begins in Tennessee, when Union troops under General Ulysses S. Grant confront Confederate troops under General Albert Sidney Johnston and P. G. T. Beauregard. Though the battle started well for Confederate forces on the first day, it ultimately turned to defeat on the second.

ABOVE: Generals Sherman and U. S. Grant

Books:
The Illustrated Comprehensive History of the Great Battle of Shiloh, by Samuel Meek Howard

Texas: San Antonio – the Battle of the Alamo

On this day in 1836, the Battle of the Alamo begins in San Antonio, then part of Mexican Texas. This battle was part of the wider Texas Revolution. The siege of the Alamo ended on the 6th March 1836 with a Mexican victory. Killed in the battle were James Bowie, William B. Travis and Davy Crockett.

France: World War I – The Battle of Verdun Begins

On this day in 1916, the Battle of Verdun began on the Western Front in World War I, between French and German forces. This battle waged in northeastern France killed close to 700 000 troops. Some 40 million artillery shells were fired before the battle concluded on the 18th December 1916 in a virtual stalemate, though regarded as a French win.