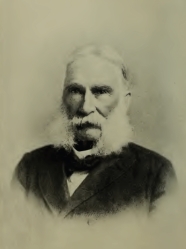 On this day in 1904, Confederate general James Longstreet died at Gainesville, Georgia, USA. He was known by General Robert E. Lee as his ‘Old War Horse.’ He was also known as ‘Old Pete.’

James Longstreet was born on the 8th January 1821, in Edgefield District, South Carolina, USA. He served in the military for most of his early life. He served with distinction in the Mexican-American War, in Texas and in the Confederate States Army.

General James Longstreet was one of the Confederate army’s leading generals, serving in both the eastern and western theaters of the American Civil War. Longstreet was severley injured at the Battle of the Wilderness, though he returned to the war.

Following the war, Longstreet lost many of his civil war friends, as he joined the Republican Party, helped President U.S. Grant and because of his highly critical comments on Robert E. Lee. His reputation has suffered great damage at his own hand, though it seems it is being restored with the passing of time.

– From Manassas to Appomattox, by James Longstreet (memoirs of the civil war in America, published in 1903)